Do you suffer from itchy-sneezy-runny-wheezy allergy symptoms? You are not alone: in the U.S., around 20% of the population is affected.
But for the most part, mild allergic symptoms are just annoying and uncomfortable. When these symptoms escalate into moderate severity, they become more of a concern, and when they turn really serious, they can be life-threatening.

Normally, when the body’s immune system encounters an antigen, which is a foreign substance outside the body, it reacts by forming antibodies to it, attacking and destroying it. The next time a person is exposed to the substance, the immune system remembers it and dispatches it quickly. However, sometimes the immune system overreacts to antigen by releasing certain chemicals such as histamine, and hypersensitivity develops; the antigen is now known as an allergen.

Allergens enter the body through inhalation, ingestion, injection, or topically (via skin exposure). Common causes of allergies include the following:

The following are commons signs and symptoms of the different categories of allergic reactions grouped by body system:

(Scroll over to see the rest of the table)

Up to 0.5-5% of the population develops anaphylaxis after insect stings, and it can be deadly - approximately 100 people die each year in the U.S. due to food-related anaphylaxis.

Any or all of the symptoms listed above for anaphylaxis may be present; it varies greatly from person to person. When certain severe conditions are present, such as a very rapid heart rate (or very slow heart rate) and rapid respirations, very low blood pressure, decreased level of consciousness and low oxygen level, this is considered anaphylactic shock, and can quickly result in death. If a person has had a previous anaphylactic reaction, the symptoms are generally the same, so at the first sign of a symptom, there should be immediate suspicion that anaphylaxis is occurring. Anaphylaxis usually occurs very quickly after an insect sting or in those who are highly allergic to certain foods like peanuts or shellfish within seconds to minutes, although it can occur up to one or two hours after exposure to the antigen.

The following three As are keys to preventing serious outcomes from anaphylaxis:

Epinephrine, also known as adrenaline, acts on alpha and beta adrenergic receptors in the body. It has the following actions in the treatment of anaphylaxis:
∗ Decreases dilation and leakage of blood vessels, leading to an increase in blood pressure
∗ Causes relaxation of the smooth muscles in the lungs, leading to decreased bronchospasm, improving wheezing and difficulty breathing
∗ Decreases itching, hives, and angioedema
∗ Relaxes the smooth muscle of the stomach, intestine, and bladder, leading to decreased gastrointestinal symptoms like nausea/vomiting and cramping

Epinephrine is administered subcutaneously (under the skin) or most commonly, intramuscularly (into the muscle) most preferably the outside of the thigh. The easiest way to administer epinephrine is with an autoinjector, a prefilled cartridge of medication, which with a simple administration technique, delivers a dose of the drug. Healthcare professionals such as EMTs and hospital personnel may use a different route of administration with a vial of epinephrine that must be drawn up in a syringe. This is more complicated and prone to errors and is not recommended for non-healthcare providers.

There are several different formulations of epinephrine available. See the chart below for dosing recommendations. 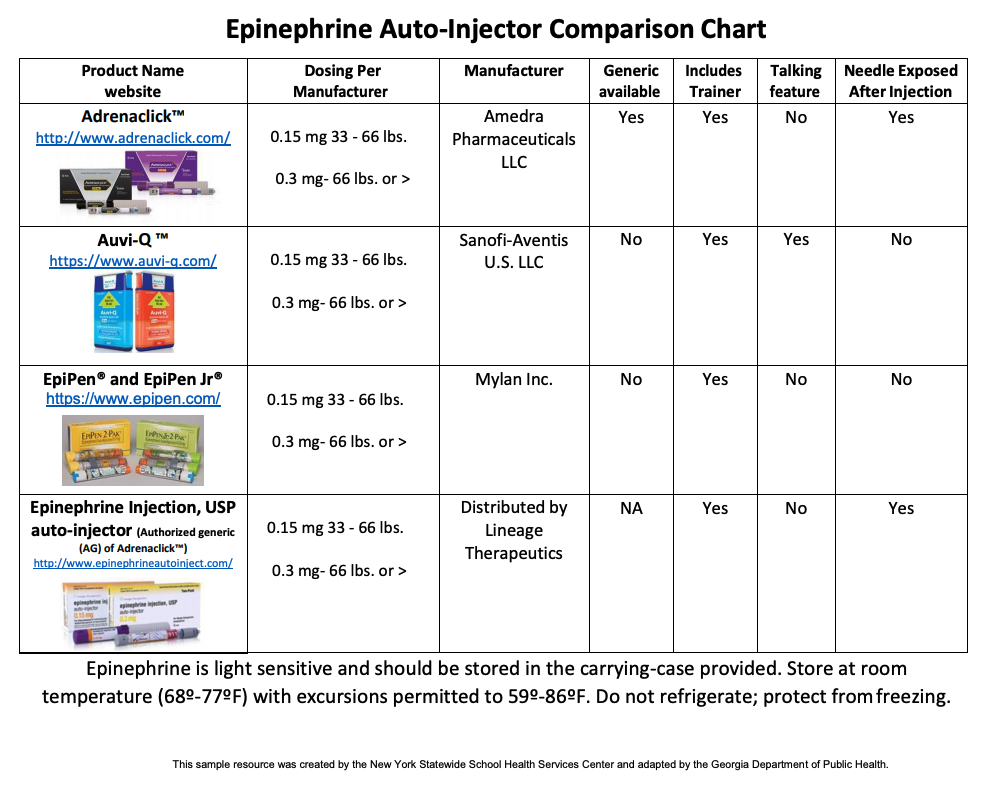 If someone with a history of anaphylaxis is experiencing symptoms, epinephrine should be administered immediately. The video at the link below offers helpful instruction on when and how to administer an EpiPen. The autoinjector also has administration instructions printed on the label.

Always err on the side of administering epinephrine. Once the epinephrine has been delivered, call 911. This must be done every time, even though the signs and symptoms of anaphylaxis look like they have resolved.

If anaphylaxis symptoms do not resolve after 5 minutes or if they resolve and return before an ambulance arrives, a second dose of the drug must be given. For this reason, all epinephrine autoinjectors are available in packs of two. The duration of action of epinephrine is approximately 10-20 minutes. What also needs to be monitored is the occurrence of a biphasic reaction, a second anaphylactic reaction in as short as two hours after the first reaction, but up to 3 days afterwards; the average is usually 6-10 hours. It has been generally accepted that these reactions may occur in up to 20% of people, although it might be much lower than this, as information continues to be gathered. Some of those who might be at risk include children between 6-9 years old, if more than one dose of epinephrine was needed to manage the initial reaction, or if an albuterol inhaler (a bronchodilator) was required to manage the anaphylactic reaction.

There are no absolute contraindications to the use of epinephrine in a life-threatening situation.

Some of most common adverse reactions to epinephrine occur as a result of its mechanism of action or could be part of the symptoms of anaphylaxis. These include anxiety, restlessness, tremor, weakness, dizziness, palpitations, nausea and vomiting, headache, and/or respiratory difficulties. If epinephrine is accidentally injected into the fingers, it can result in vasoconstriction (restricted blood flow) to the digit and emergency treatment is necessary to treat it.

Epinephrine is light sensitive and should be stored in the carrier tube provided to protect it from light. It should be stored room temperature 68° to 77°F (20° to 25°C), but temperature excursions are permitted from 59°F-86°F (15°C-30°C). It should not be refrigerated, and shouldn’t be kept in the glove compartment of a hot car! Before using, the solution in the autoinjector should be checked to make sure it is not discolored (pinkish or brown color) or contains floating particles. If so, it should be replaced immediately as this may indicate a decreased effectiveness of the drug.

Can Expired EpiPen Be Administered? 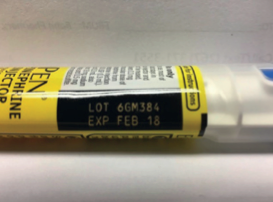 Most epinephrine autoinjectors have an expiration date of 12-18 months. However, several stability studies have demonstrated that the drug remained potent for many months after the expiration date. In the past several years, there was a large increase in the cost of epinephrine autoinjectors, resulting in a large public outcry to decrease the costs (they did go down somewhat). Also as a result of that, manufacturers are being encouraged to extend expiration dates on the autoinjectors so they don’t have to be replaced as often. It gets quite expensive to replace them, especially since two doses must now be purchased (before, only one autoinjector was dispensed), and often the patient will have multiple supplies of the injectors, i.e., at home, at school, at the beach house, etc.

While there are no firm guidelines on this, one of the authors of the stability studies concluded: “If, however, the only autoinjector available is an outdated one, it could be used as long as no discoloration or precipitates [floating particles] are apparent because the potential benefit of using it is greater than the potential risk of a suboptimal epinephrine dose or of no epinephrine treatment at all.”

Can an epinephrine pen be administered to someone for whom it is not prescribed?

Epinephrine autoinjectors are available by prescription only and should be administered to the person for whom they are prescribed. However, laws are being passed enabling non-healthcare professionals trained in the recognition of anaphylaxis and administration of epinephrine to use the drug in an emergency. For example, in schools, the “School Access to Emergency Epinephrine Act” was passed in November 2013. In addition to schools, EMS personnel, and outdoor education programs, some states are starting to encourage training and stocking of epinephrine for other types of organizations such as entertainment venues, hotels, museums, restaurants, shopping malls, sports arenas, etc., similar to what is being done with AEDs. But this has a long way to go.

Other Medications Used in the Treatment of Anaphylaxis

Other medications that are administered for the treatment of anaphylaxis once someone reaches the hospital are corticosteroids (for example, intravenous dexamethasone), antihistamines such as diphenhydramine (Benadryl), famotidine (Pepcid), intravenous fluids, and a bronchodilator such as albuterol.

By Nancy Pietroski, PharmD, WEMT, FAWM, CTH Summer has arrived with its balmy breezes and BBQs, but for some, the bane of outside existence – insect bites and stings. While most people suffer just

Duration Health
—
When a Needle Can Save a Life: Epinephrine for Anaphylaxis
Share this